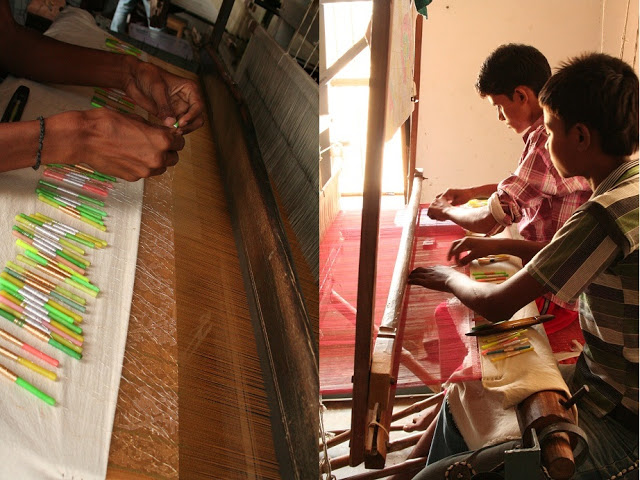 Gandhi adopted Khadi as a political iconography in protest against British mill-made cotton. In the 21st century, Gandhi’s anti-Colonial Swadeshi politics are garnished with the ethos of sustainability, dressed with notions of handmade luxury, and marketed as the beacon of hope to uplift the indigenous weavers of India. Khadi’s share in textile production has doubled in the last five years. While the Gandhian handlooms movement has empowered various elite sections of the Indian textile industry, the weavers, however, continue to remain underpaid labours. Can weavers completely depend upon existing Gandhian handloom ethos and sustain competition from technologically superior powerloom players within the country and abroad?

Looms operated with the aid of electric power for the manufacturing of cloth are called as Powerlooms whereas the Handlooms are looms operated without aid of power. The exclusive-organised-and-elite-controlled powerloom sector roughly accounts for 60% of fabric production in India whereas the oppressed-castes dominated the handloom sector despite employing a whopping 11 million indigenous artisans, contributes to a meagre 15% of fabric production.  While the Government of India protects the interests of the handloom sector from the encroachment of the powerloom industry by way of reserving certain specifications for exclusive production by handlooms (Handlooms Reservation of Articles for Production Act, 1985), the need to nurture powerloom industries were also addressed simultaneously by the state.  In the early years of independence, Gandhian liberals shielded powerloom-elites from foreign competition and in later years through policies of nationalising mills.

“The hand loom worker was lured with the carrot of sops to race on a bullock cart on a road that moved much faster than his vehicle, and against a competitor who drove a racing car. It was a race that was illogical, the hand operated loom can never be as productive as the mechanized, power driven mill. It can never achieve the economies of scale required to compete in a commoditized market, because the hand loom is a lone worker and his family, not an organization like the mill.” – Round Table India

When I visited Benaras craft clusters in the early 2010s, inadequate wages and resultant high-job dropout rates were the biggest concerns bothering handloom weavers on the ground reality. The weavers at Benaras were then paid a meagre wage averaging about Rs.150 per day. A recent study by the Centre for Handloom Information and Advocacy in Andhra Pradesh found that 55% of weavers’ families earn less than Rs 1,000 a month. Handloom weavers are forced to look out for other jobs with better pay and there’s no bigger loss to the craft than the loss of such highly skilled artisans & craftsmen. State-sponsored socialism needs to club with the modernisation of small-scale industries for the betterment of both the art and artisan. Gandhi championed Khadi in colonial India to compete British-mill made goods. Gandhians of 21st century are still singing the glory of Khadi – What they distracted you is from the fact that average Indian weavers still don’t have access to the power-driven machines the British used even 70 years ago! Caging the weaver within the technologically-crippled maze of Gandhian handlooms has only discouraged marginalised communities from venturing into savarnas-controlled powerloom industries.

Fashion’s elite torchbearers of Khadi have comfortably lived in a cocoon enabling them to prioritise their esteem & self-actualisation needs over the basic survival needs of artisans – they’ve focused more on protecting the arts than the artisan itself. Craft only lives till the craftsmen live. The artisans are struggling to meet ends while the elite-classes selling the handloom narrative are minting fortune. Although cherished for Gandhian swadeshi ethos, the machines involved in handloom production are begging for immediate technological uplift and upgrade. It is more important to equip the Indian weaver with efficient, sustainable, and modern machinery than keep alive a culture where rich people get to shop handmade labour. Promoting handlooms when power-operated looms are still away from the reach of the ordinary weavers is only reviving typewriter culture in the era of 5G. Culture is a self-sustaining entity that changes and evolves forever, but jobs aren’t! Industrial reforms are the immediate needs of the hour. It’s the 21st century – machines are set to steal most labour jobs – the sooner labour classes progress their way out of Gandhian “handmade” utopia, the nearer is an egalitarian future!

Like most handmade procedures, weaving with hand-operated looms involve lesser carbon-emissions as compared to power-operated looms. Environmental hazards are a potential threat to every living creature including Gandhian elites, however, the hazardous working conditions of small-scale weaving industries are bigger immediate concerns threatening the handloom weaver in particular. Small scale industries are scattered and largely supported by individuals (and immediate family) unlike the powerloom mills operated in larger scales. Loss of eyesight due to inadequate lighting conditions is alarmingly common among handloom weavers. Weaving with hand-operated looms also involves tedious labour – labour which Gandhian savarnas wouldn’t do themselves, but will glorify about.

Craft specific labour groups like the handloom-weavers and other marginalised castes, as well as the hegemony of elite classes in powerloom sectors,  are salient characteristics of Varnashrama society fantasied by Gandhians. In elitist-liberal narratives, the well-off Mahatma Gandhi shedding Western attire and adopting loin cloth is dubbed as the biggest sartorial revolution in Indian politics. Gandhi’s modesty was merely in outlook while he continued to enjoy most socio-economic privileges of a twice-born Hindu man while still clad in a humble loincloth. Unlike Gandhi, Babasaheb Ambedkar had to fight his way from not only poverty but also the Hindu caste-apartheid. Unlike the Baniya-born Gandhi who discovered discrimination in South Africa, Dr B R Ambedkar for the first time lived in a society that promised equality, liberty & freedom when he moved outside the Varnashrama society. From being born in a caste who were once denied to cover upper-body, Babasaheb went on to earn his blue coat-suit which he proudly wore – a revolting contrast from Gandhi’s modest clothing politics. Progress is not when Gandhi appropriates the poor man’s outfit, progress is when the poor man has access to the same resources that Gandhi did. Gandhi abandoning his modern clothing to adopt loin cloth has as much significance to the marginalised Indians as a white man getting fake tan would concern brown Indians. Much like Gandhi, Gandhian elites are privileged enough to meddle even with stone-age tools and still make a comfortable living, but handloom weavers aren’t. Handlooms are one among many conscious consumption “choices” for Gandhian elites, but modern machinery & amenities are a “necessity” for the poor weaver.