Origin of Clothing of Early Hominids: Who Invented & Why Wear?

“Gender-Neutrality is the default settings involved in the origin of clothing.” – Purushu Arie 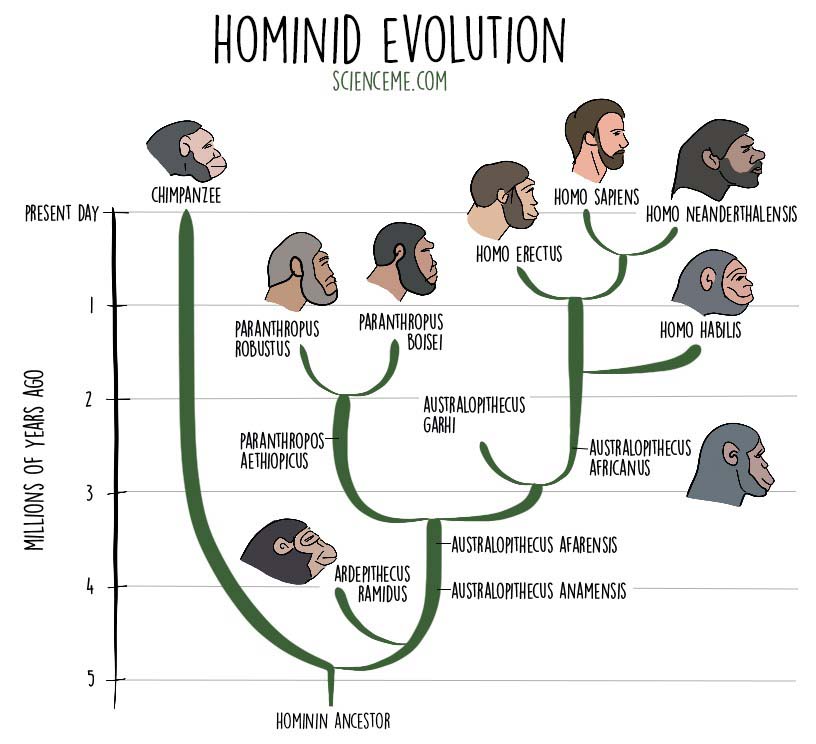 Clothing: A Survival Reaction to Evolutionary Loss of Fur?

Fossil remains of Lucy, an Australopithecus Afarensis from 3.2 million years ago suggests that she could walk upright on two legs and be covered in fur. By around 2 million / 20 lakh years ago, hominids increasingly inhabited grasslands where they started to hunt & eat more meat. Hominids also lost their body hair over this period to sweat more profusely and survive the sun’s glaring heat.[1] It is possible that early hominids covered themselves in animal furs/skins/feathers (a byproduct of their food) to compensate for the evolutionary loss of hair – particularly to survive in harsh environmental conditions. Earliest hominids who invented clothing probably didn’t wear clothes all the time but covered up in animal hides only in extreme weathers.

Evolutionary Role of Homo Eructus in Origin of Clothing:

While Australopithecus hominids were the first to use stone tools, a Columbia University research suggests that Homo Eructus who appeared about 2 million ago were the earliest of hominids to forge weapons like hand-axe, and master technologies like the controlled use of fire.[2]

Homo Eructus is not only speculated to be the first of hominids to live in a hunter-gatherer society but also among the earliest to migrate in waves from Africa to Eurasia[3] – both of which plays a crucial role in the evolutionary development of clothing. Having lived for over a million years, Homo Erectus is probably the longest-lived species of Homo, and diverged into sub-species by around 5,00,000 years ago – notably Homo Heidelbergensis, the common ancestor of both Homo Sapiens & Neanderthals who first appeared in Africa & Eurasia respectively around 3,00,000-2,00,000 years ago.

Thermal Model of Origin of Clothing:

Survival needs like thermal protection appear to be the primary purpose of clothing in ice age conditions which began before 2.5 million years and lasted up to 11,700 years ago. It is likely that only those hominids who covered adequately survived the test of evolution in the cold Pleistocene climate, and it can be commented with surety that Homo Sapiens wore clothes on a regular basis to keep warm after the first exposure to such harsh Ice Age conditions. The dating of the genesis of clothing by understanding the evolution of clothing lice, however, implies that Homo Sapiens wore clothes at least about 70,000-40,000 years before the earliest migrations out of Africa to colder latitudes.

Few forms of body art and modifications of early hominids include: 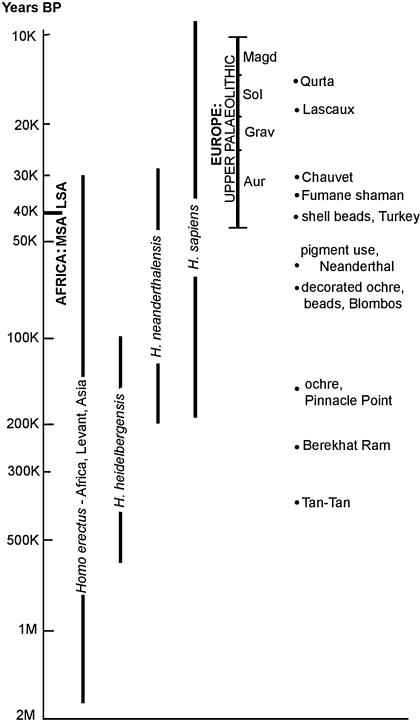 Hominids in Africa used ochre pigments by 2,00,000BP – almost the same time range as the early red ochre use in the Neanderthals record.[5] H. sapiens used beads in Kibish, Ethiopia dated to 195 000 BP.[6] The practice of piercing teeth, shells and bones, and stringing them, singly or multiply, to make a pendant or necklace is the oldest known form of personal decoration after body painting.[7] Discovery of spun, dyed and knotted flax fibres from a series of Upper Paleolithic layers at Dzudzuana Cave, located in the foothills of the Caucasus, Georgia, indicates that prehistoric hunter-gatherers developed a knack for vanity, decorations and other sartorial symbolic interpretations at least before 30,000 years.[8] It is possible that some hominids substituted body decorations with clothing only after they migrated and faced cold weather conditions.

Combination of Multiple Needs/Wants Leading to Origin of Clothing: 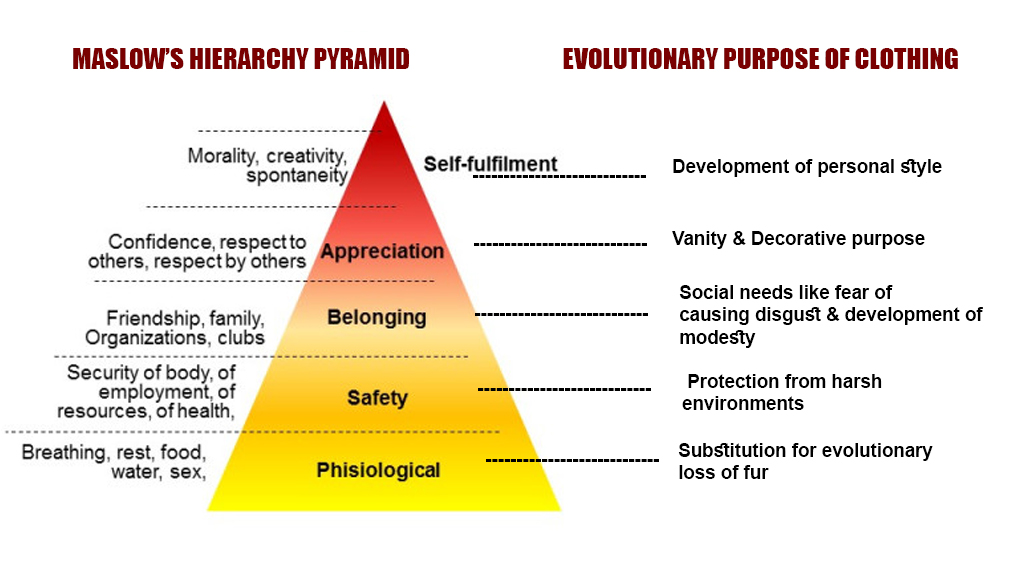 The fact that nudity remains an acceptable norm in many hunter-gatherer cultures of the modern world asserts that clothing in itself is not vital for survival – not for everyone at least. In the vast timeline of early hominids spanning millions of years, it is highly likely that clothing was invented more than once for more than one purpose by various groups of Hominids at various locations spread from Africa to Eurasia. For example, Neanderthals who inhabited Europe are likely to have invented clothing at a different timeline (possibly earlier) than Homo Sapiens. In contrast to the warm tropical weathers of Africa where Homo Sapiens lived for the most of their evolutionary history, Neanderthals lived in colder European conditions and wore thick furs cloak that offered thermal protection which was crucial for survival.[9]

Role of Clothing in Evolutionary Success of Homo Sapiens Over Other Hominids: