For most Thamizhians, fashion and style is beyond the paid manufactured trends found in magazines. Veshti clad Thamizh men are more likely to ask, “What’s Gucci my nigga? What’s Louis my killa?” Thamizh Nadu is a unique place where more fashion trends have trickled up from the lifestyle of common man than the trends that have trickled down from elite class. The clothing of Dravidian politics was mostly simple but boasts rich heritage and history. The unique style statement of Dr. Kalaignar Karunanidhi was embedded with deep political statements. Kalaignar Karunanidhi’s clothing politics only added to his radical voice. Honouring the legacy of the stalwart Dravidian leader, here’s a walk through Kalaignar Karunanidhi’s clothing politics. 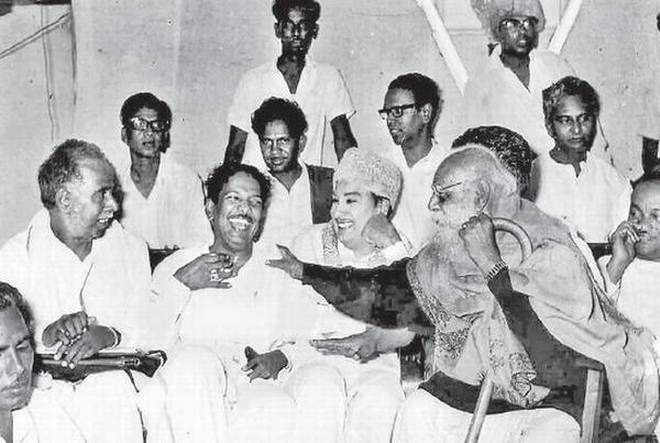 In front row (left to right): Annadurai, M. Karunanidhi, MGR and Periyar wearing veshti-sattai at a DMK meet in then Madras. Image: The Hindu

In Madras, the rulers often wore the humble white veshti and the opulent bespoke suits belonged to their bureaucrats. Crisp white shirt and veshti is the trademark fashion of men in Thamizh Nadu politics. Kalaignar continued this Dravidian legacy by adopting the kara border veshti-sattai as his political uniform.

Karunanidhi started wearing black glasses after he met with an accident in the late 1960s that damaged his left eye. The black glasses which he wore for more than half a decade was changed to amber brown upon his doctor’s recommendation just a few months before his demise. Coincidentally, Kalaignar’s long-time friend and eventual political rival MGR also wore black glasses. Together, the duo created unprecedented crazy for black goggles in Thamizh Nadu. 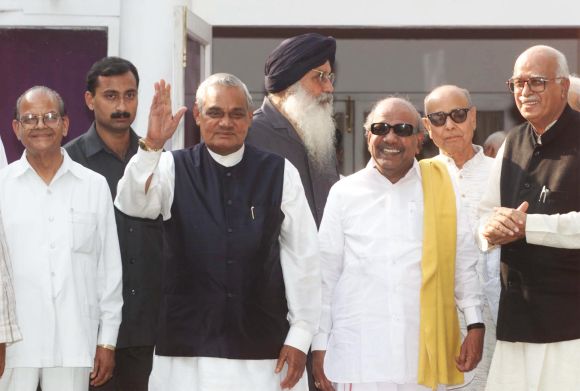 Dravidian ideologues chose to wear the common man’s thundu, a traditional cotton towel with kara borders in protest against the caste prejudice involved in wearing shawl over the shoulders. From there on, towels/thundu emerged as the raging iconography of Dravidian politics that vehemently opposed Brahmanical supremacist hegemony. Everyone from Periyar, Anna, MGR, Kalaignar to contemporaries like Vaiko have worn towels over shoulders. Though Karunanidhi initially wore white thundu featuring kara borders, he later chose the yellow shawl which became a trademark of Kalaignar swag. In MGR ruled 1980s, more than 20 people were killed by the police in the baton attack and shooting in a series of protests led by PMK founder Dr. Ramadoss. Thamizh Nadu has never seen such a big struggle before. After the demise of MGR, Karunanidhi succeeded in the elections and negotiated with the Vanniyar Sangam leaders headed by Dr. Ramadoss, and eventually segregated Vanniyars among the Most Backward Caste community. Kalaignar Karunanidhi gave a 20% reservation to the community, and as gratitude to his social reform, PMK leader Ramadoss garnered Kalaignar M Karunanidhi with the yellow shawl. The colour yellow denoted the Vanniyar flag and Kalaignar Karunanidhi donned the yellow shawl since 1989. 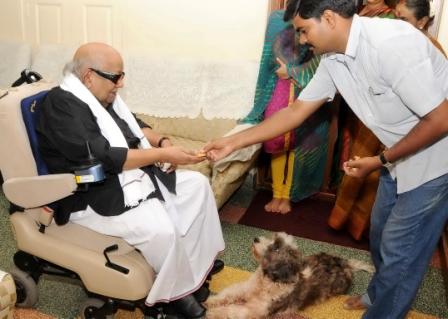 Symbolism was deeply embedded in Kalaignar’s clothing. Black shirts and flags were raging iconography of protest and anarchy in Thamizh politics. The colour black which was often associated with death, bad-luck and other things inauspicious, was encouraged by Dravidar Kazhagam found Periyar EV Ramasamy. Kalaignar Karunanidhi, a staunch rationalist and crusader of superstitions, proudly wore black shirt to mock and protest irrational forces. 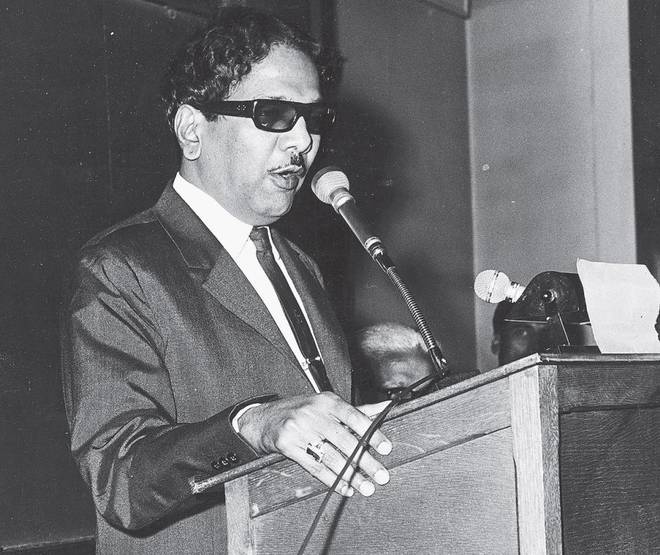 M. Karunanidhi addressing the third meet of the International Conference of Thamizh Studies, inaugurated at the College de France in Paris on July 15, 1970. Image: The Hindu

It may be hard for the present generation to imagine Dr. Kalaignar in anything other than traditional white shirt, veshti, and yellow shawl he wore for several decades. However the five-time Thamizh Nadu chief minister also donned Western suits in early 60s and 70s especially when he travelled abroad to represent Thamizh Nadu on a global platform. 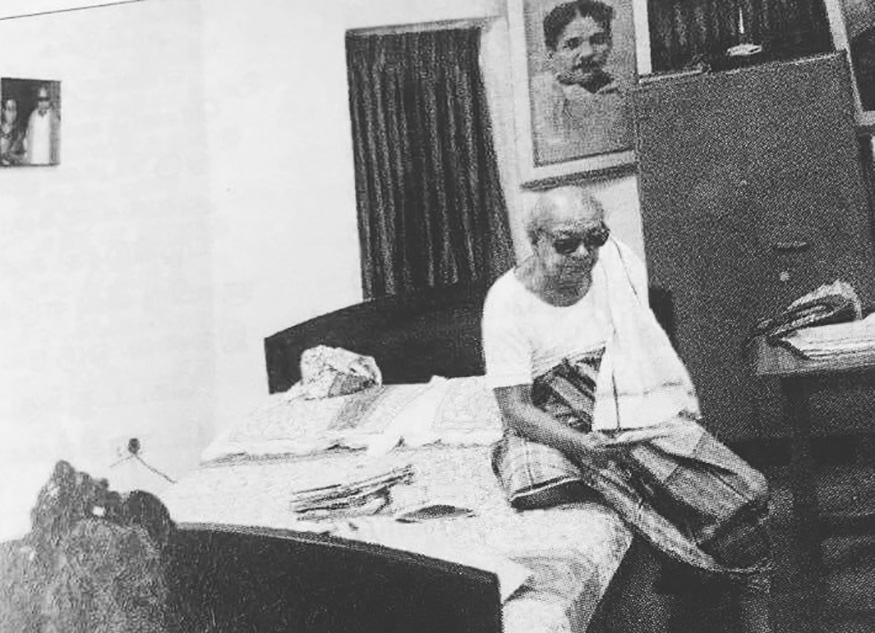 The global Thamizhan was still rooted and grounded in the iconic Madras checks. Simple and comfortable lungis were integral part of Kalaignar’s leisurewear clothing.