Whether you’ve already found the right partner or not, every wedding you attend adds to the expectations going into your own wedding day. You’ve possibly dreamt of a honeymoon stay at a top-tier luxury hotel, like here, that offers even rolling surf on sandy beach. Nothing has intrigued me like the festive rituals involved in Indian weddings and how these customs vary greatly with geography and cultures. Apart from the auspicious celebration of love and commitment itself, one unfortunate aspect that brings together weddings from myriad of cultures is the sexism inherent in customs.

Plenty of sexist wedding customs were shaped in a society that that wasn’t ready to accept neutrality of genders. Ever hit in your gut why it’s the woman who is socially expected to take up husband’s surname? Or worse, how millions are denied the fundamental right to get married on basis of sex or sexual orientation? Customs that establish power balance on basis of sex builds unrealistic expectations of what one expects from their partner. A great deal of what your children expect from their partners can depend on the example that you set. A wedding can be a brilliant start. How about making offbeat gender neutral statement by skipping deeply entrenched sexist traditions that are inherent? 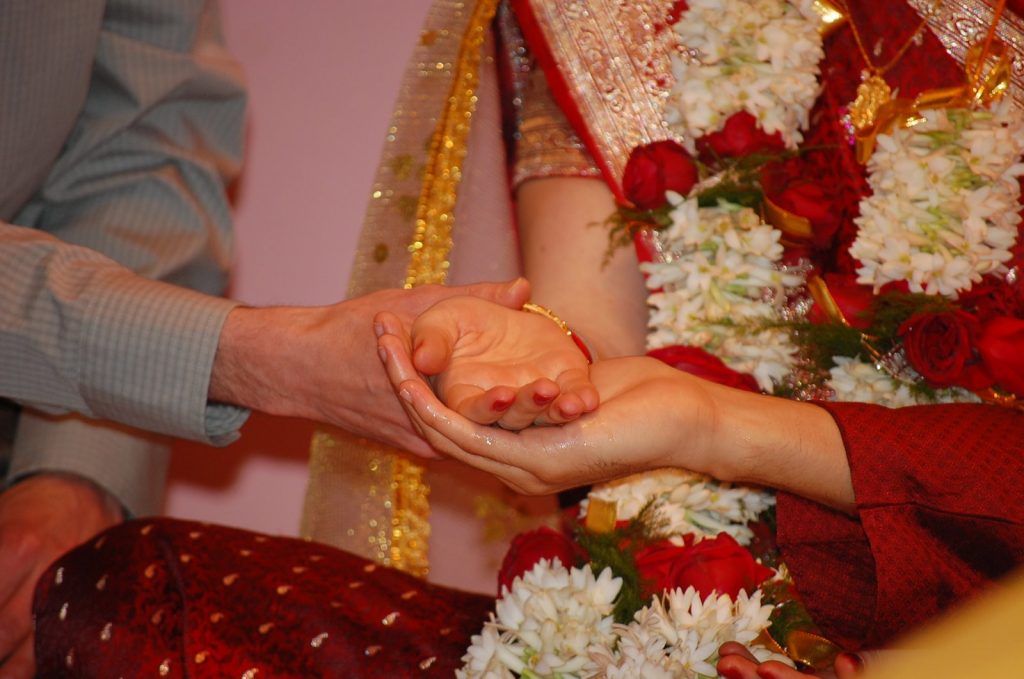 Kanyadaan, translating to “Gift of a Virgin” is a popular Hindu tradition involving the act of “giving away” the daughter in charity by her father.

The veil often symbolises the bride’s hymen which the husband will remove when he deflowers her. The white wedding gown represents the bride’s sexual purity. Ditch the white dress! How about an exotic champagne color wedding dress online? Pink wedding dresses are trendy alternatives of the hour. Or simply wear what you want. If you’re hell-bent on sticking to the customs stressing on sexual abstinence, just have your partner follow the same to square the deal.

Excessively focusing on chastity of one particular gender only strengthens the implication of their primary role of a sexual being after marriage. Insecure unfuckable men of patriarchal past probably had a great role in establishing these norms… but hey, you live in 2-0-1-7.

Modern weddings can be rather pricey, and it’s unfair to demand the bride’s family to pay for the wedding. Dowry is legally banned in India but the culture still prevails in subtlety in form of expectations of expensively gifts like jewellery, car and apartments from the bride’s family.

Washing feet is seen as an act of respect in Indian traditions, but respect should come from both ways. The bride’s family is expected to wash the groom’s feet and the groom may not always return the sign of respect.

Garter toss is a Western tradition where bride’s garter is removed from her leg by the groom and tossed to a gathering of single men.

Carrying the bride across threshold has roots in Roman society where the bride was dragged to bedroom in public for deflowering to attest the marriage’s consummation.

The act of father “giving away” daughter is too obvious to mention. Bidai, a popular wedding custom in India involves the daughter leaving her home to settle with in-laws. In a fair world, the groom’s parents should be returning the act by giving away their son to the girl.

Gender specific wedding iconography like engagement ring/thaali/mangalsutra for her, but not for him only makes your auspicious wedding look like a market place trade deal. How about “exchanging” rings, garland or mangalsurta and make it a two way deal to establish your marital status?

“The ritual of tying a “thaali” (or mangalsutra) around the woman’s neck at the marriage ceremony and considering her to be his slave is similar to buying a buffalo, tying a cord around its neck and dragging it home.” – Periyar

Kashi yatra is a popular custom in Tamil Brahmin weddings where the groom refuses to marry the bride and sets on (mock) pilgrimage to Kashi in search of ascetic life. In process, the bride’s father pleads the groom, reassures him the benefits of conjugal life in marrying his daughter.  In a country where there are stark gender disparities in literacy rate, when will it be the woman’s turn to seek knowledge?

There are other sexist traditions, one even involving the bride eating the groom’s left-over food (over-glorified in South Indian films). Equating husband with god is another overdone cliché in India. The bride always bows down to touch the husband’s feet and you’ll almost never see vice-versa happening in traditional Indian weddings. And finally, gives up her surname to acquire her husband’s. All these customs on multiple levels reinforce the conception of woman as man’s property after marriage.

It gets as simple as saying “husband and wife” rather than “man and wife”. Gender prejudice sparks in with vows such as “honour and obey” specifically for women (& absent for men.)

It is no secret that weddings come with problematic customs of past. But it is up to the present to be the change that can help build a world where we and our children can live in absence of dichotomy based on gender. The key to gender neutral thought lies in designing customs according to individuals involved and not their genders.