And I Ended Up Correcting The Job Interviewer @ Amazon 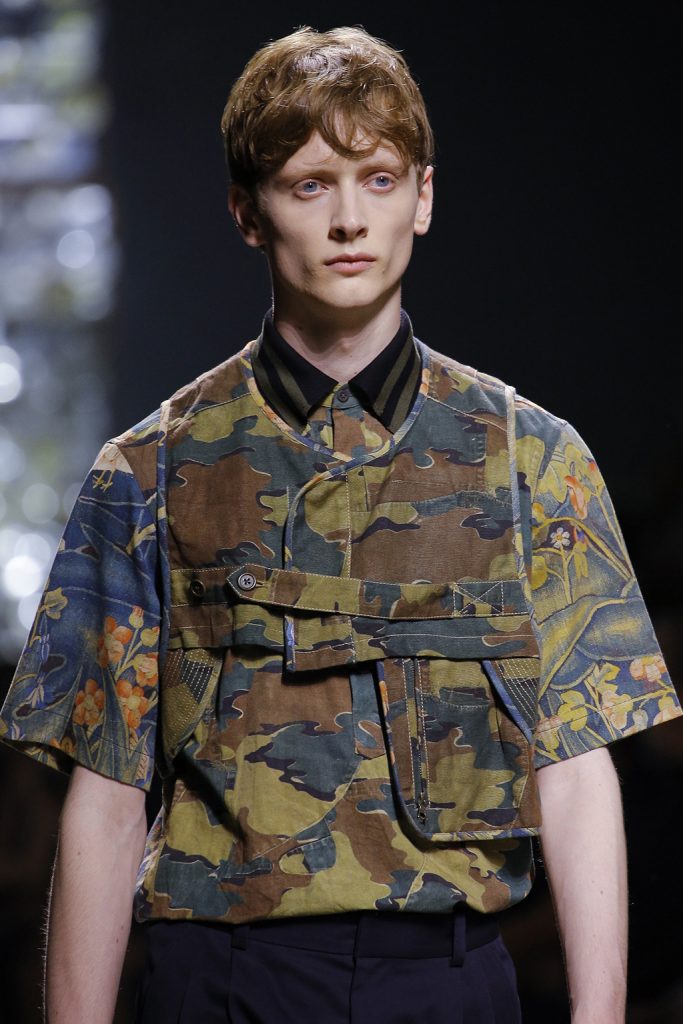 Speaking in terms of financial returns, Chennai isn’t among the ideal cities to work as an independent fashion blogger. I’ve been taking up various styling and fashion design projects to make up for the dip in revenue of brand collaborations ever since I relocated from Mumbai to Chennai in 2014. And in midst of those circumstances, I received an email from Talent Acquisition Team of Amazon India stating that my profile and core work area could be a potential fit in their editorial team. The idea of extending my career in fashion journalism by serving a challenging position at a reputed firm was enticing and I immediately fixed a telephonic interview on 30th March (I turned 26!). Following the interview on my birthday, I heard back from the Amazon team few hours ago and I was compelled to write the following feedback via email:

Thank you for updating me regarding the interview I had with Amazon, India on 30th March 2017. I was keenly waiting for your response to the interview, not only to know the result/reaction from the company’s side but with even more eagerness to write back my own pointers in reaction to the roughly half an hour telephonic conversation I had with Ms. Yamini Batra from your team.

I’ve had frequent interactions with various clients and employers for potential collaborations and other scope of business in past. Some of those interactions turn up into a mutually beneficial deal whereas others simply don’t materialise. However never have I written back to state my assessments after an interview in past and I am unsure if it’s a frequent practice where the interviewee provides feedback to the interviewers. You may question my attitude for stating the fact that I was rather disappointed with the unpreparedness of the under-qualified interviewer who failed to have understanding of basic fashion terminology, etymology and trends, but my cynicism comes from a logical position.

To begin with, there was no formal introduction from the interviewer’s part other than her name and the firm she represents. In a classic case of unpreparedness, the interviewer had not gone through my resume or my fashion articles that I had sent across in prior to the interview and I had to take her through the details of my educational qualification, links to fashion columns from past, and other work experience and accolades spanning over the last eight years over phone in spite of elaborately mentioning the same in resume & email.  Amazon’s core leadership principles stresses on obsessing over the customers, and directing even a meagre percentage of the obsession and preparedness towards the interviewee would demonstrate lot more dignity and value towards the qualifications, spirit and more importantly the time of the candidate.

My contempt for the interview comes from the fact that even a little spelling error can result in grave scrutiny from interviewees (spotted yet?) but they get away by not knowing some of the most basic concepts concerning the domain of expertise. The first and only factual question from the interviewer asked me to state top SS17 trends for men & women.

I went on to explain about how my favourite trend of the moment – camouflage is setting the Indian streets ablaze and the interviewer who had no knowledge of this trend went on to indict me of not doing my research.  I was rather flabbergasted by her assertive proclamation of ignorance but gave her the benefit of doubt since I didn’t expect HR executive of Amazon to be updated with latest fashion trends. Given my status as India’s leading commentator of fashion trends & styles, I felt important to educate her about how camouflage is a hot trend and it’s seen literally everywhere from runways to streets… Little knowledge can never hurt, even if it’s coming from an interviewee.

“We’ll leave that there…,” she explained in response to how camouflage was a trend and asked me to state other top fashion trends for the season. May be I was being too ahead of time by stating camouflage, at least by the interviewer’s standards and I went on to talk about trends that have lived for a while now and still making waves in order to make it easier for the interviewer to recognise/identify with. I talked about how jogger pants have just trickled down to Indian masses & men are now wearing jogger denims & chinos even to workplace. White sneakers are still making waves in Indian streetstyle repertoire. Then there’s flared pants, an emerging trend from revival of 70s styles…..[[SNAP]] “But these are just products, not trends. I need trends… Athleisure is a trend for example,” claimed the interviewer Ms. Yamini Batra.

I was left with no choice but to explain how Athleisure is longer lived “macro-trend”, whereas styles like joggers are examples of shorter lived “micro-trend” which are derived from “macro-trends” like Athleisure.India’s most prestigious fashion institution, NIFT New Delhi has taught me that everything from a colour, silhouette, cut and style that’s adopted by majority of a socio-cultural group at a given point of time is a fashion trend. I was extremely confident about my answer however the interviewer expressed her unwillingness for basic listening capacity and went on to say how she doesn’t need long explanations and requires just pointers.

The other questions were mostly phrased in form of situations and I found it extremely difficult explaining to an individual who isn’t intellectually sound on principles of fashion in general. Every candidate looks forward to work in an atmosphere where they can gain knowledge and experience, and grow as a professional. I was constantly correcting or educating your interviewer and that doesn’t leave a good taste for someone who has applied for a job in your firm. For one of the situational question, I didn’t have an option but to explain your interviewer how I cannot elaborate more without using fashion & design terminologies which she may not grasp. It was exactly the moment when the interviewer claimed that she’s from fashion design background too and she’s the fashion editor at Amazon and I already knew I wouldn’t want to work with someone whom I need to educate. By the time interview got over, my friends who overheard the conversation went on to joke about how I ended up interviewing and assessing the interviewer itself. I knew right after I cut the phone call that I will have to write back to you regarding the same, irrespective of what the result is. I would appreciate if Amazon can provide me with audio recording of the telephonic conversation since I can upload the same on my blog and inform millions of other candidates who attend interviews on a daily basis about the potential interviewers fielded by even big players like Amazon… Thousands can definitely learn a thing or two from the same from that telephonic conversation.

It’s not a great sign when the interviewee feels smarter than the interviewer itself. In a hypothetical role reversal where I interviewed your interviewer, I would not go ahead with the candidate for lack of preparedness and poor understanding of basic concepts of fashion and trend cycle in general.

The job of interviewing is one of the core competencies in talent acquisition in today’s world and it’s important to field candidates who are strong with not only the foundation principles concerning the domain knowledge but also current trends which are changing in blink of an eye. Vast knowledge of fashion & costume history and an eye for groundbreaking trends of tomorrow is my forte. I have interacted and given seminars concerning fashion trends to professionals of various leading fashion & lifestyle brands in past. Please feel free to buzz me or hire any other qualified professional who can help your editorial team by enriching them with knowledge of basic etymology & principles concerning fashion and how to spot changing trends in times of fast-fashion culture – because it’s required and I believe it’s worth spending an additional 15 minutes to provide you with this feedback. Hope it helps. 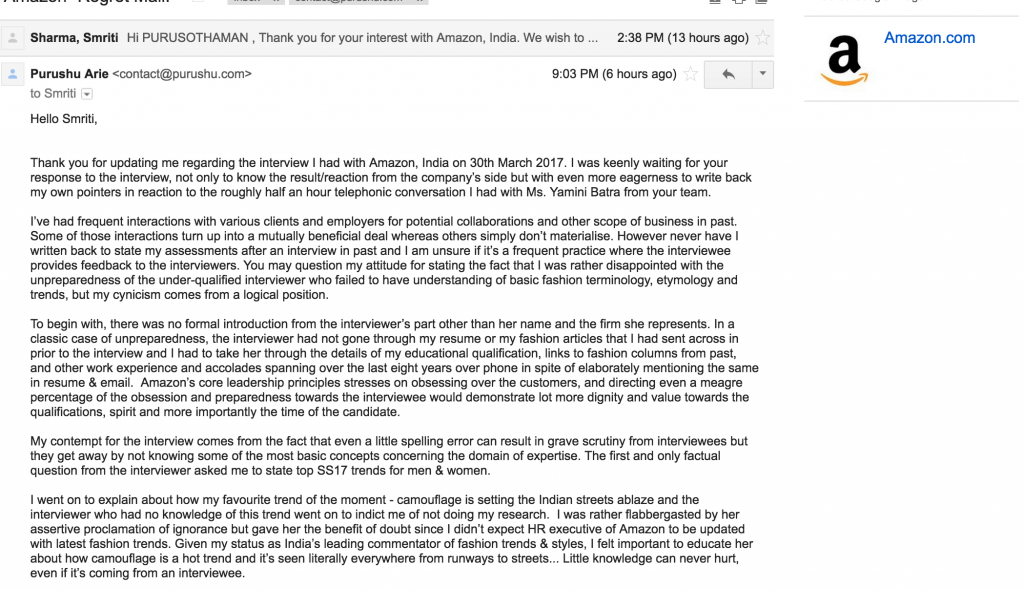 UPDATE: The Amazon team promptly responded to my email and rescheduled the interview, this time with their renowned Fashion Director Shri. Narendra Kumar Ahmed. Following which, the HR team informed this time that I was over-qualified for the the role and I don’t fit in. Nevertheless, I express my sincere gratitude for the effort and time put in trying to fix what went wrong. Gracias 🙂

My voice goes out to anyone who’ve had similar experience: NEVER EVER LET AN IGNORANT PERSON, NO MATTER HOW LOUD THEY ARE OR WHAT POSITION THEY SIT IN… NEVER LET THEM CONVINCE YOU ARE WRONG WHEN YOU KNOW YOU AREN’T. Don’t lose hope. Dumb people will continue to be loud and confident but eventually, truth is always floating on the surface to be uncovered. 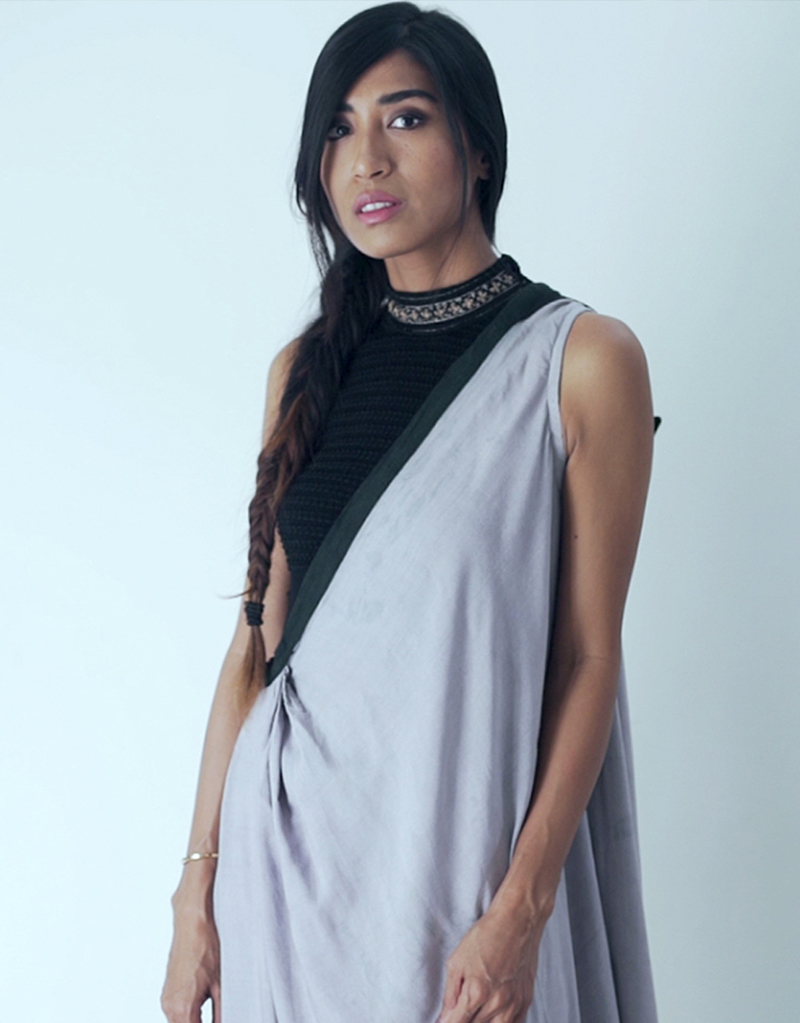 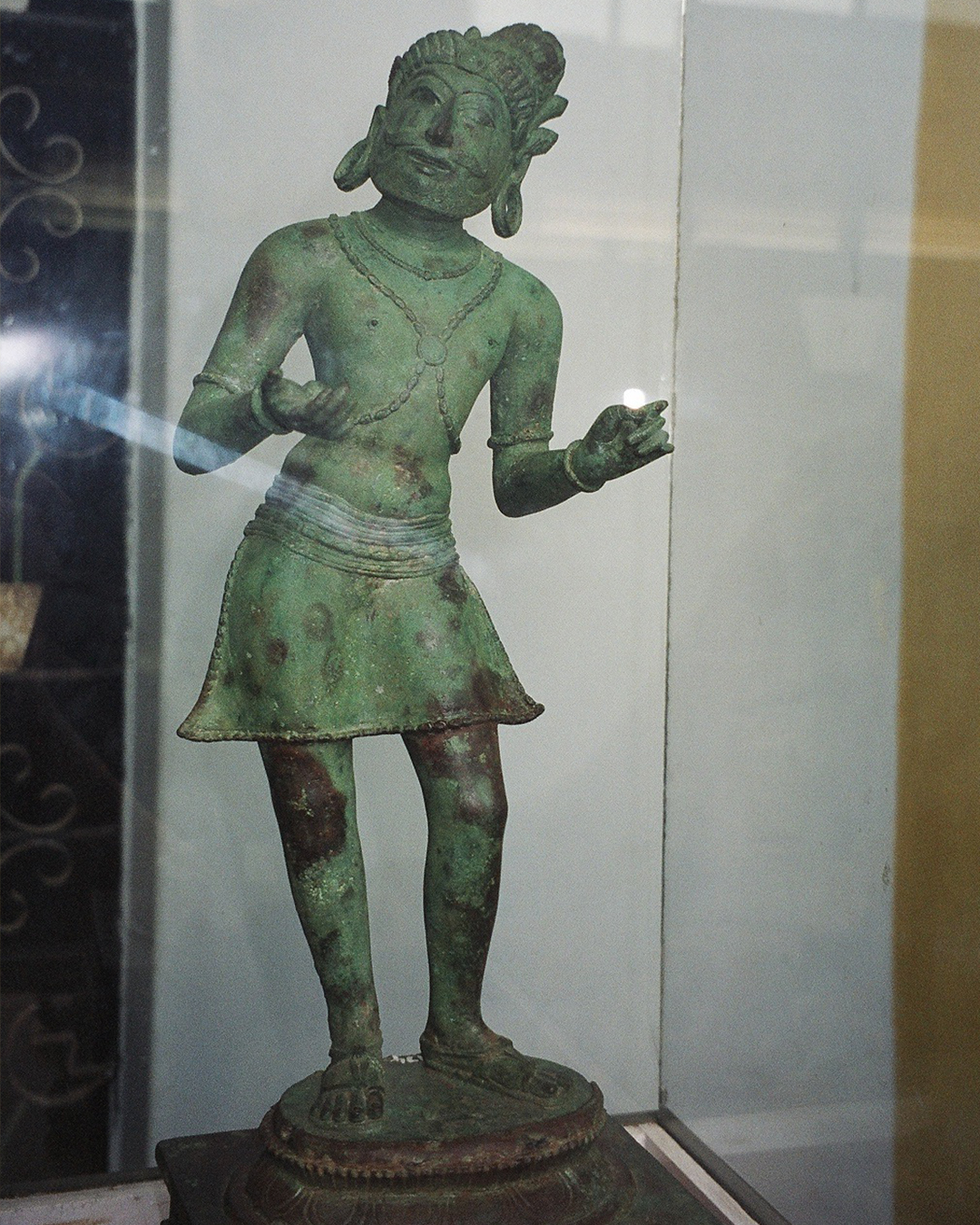