Difference Between Sex and Gender, Gender Identity and Gender Expression

Sex and gender are commonly used terms which are often confused between since the terms are used interchangeably in everyday usage. The confusion doesn’t end with sex and gender but their relationship with sexual orientation, gender identity and gender expression too.

DIFFERENCE BETWEEN SEX AND GENDER

Sex denotes biological aspects whereas gender denotes social and psychological aspects of sex. Sex cannot be changed without medical intervention whereas gender norms are fluid and change with individuals, society, culture, geographical boundaries and historic timelines. Classic example would be the colour pink. Pink was originally considered a masculine colour until World War II when it was no longer the tough hue that it was once perceived to be. The change in perception of the colour was the primary reason for me to use pink background in the images below. Thanks to history, the colour pink, in a way represents duality of masculine and feminine. Gender norms change not only with time but also with culture. What’s masculine in one society may be considered feminine in another society.

A male has a penis, testicles, XY chromosome and mostly testosterone. Females have a vagina, ovaries, XX chromosomes and predominantly estrogen. There are various possibilities with intersex. For example, sometimes it’s about having a combination of both male and female genitals, sometimes it’s about having male’s genitals with excess female hormones. Here are some statitstics provided by Intersex Society of America.

The term transsexual comes in when a person changes the sex assigned in birth.

GENDER IDENTITY – HOW YOU IDENTITY YOURSELF

Gender identity stems from what you identify yourself with. Various personal experiences, psychological traits and sometimes even biological factors like differential hormone levels may play key role in how an individual identify themselves. We learn to identify our sex at a young age and there are several cases when the gender an individual identifies with may not align with the gender assigned during birth. In a cisgender normative society, an individual often faces psychological pressure when the gender identity contradicts expectations from friends, family and society in general. 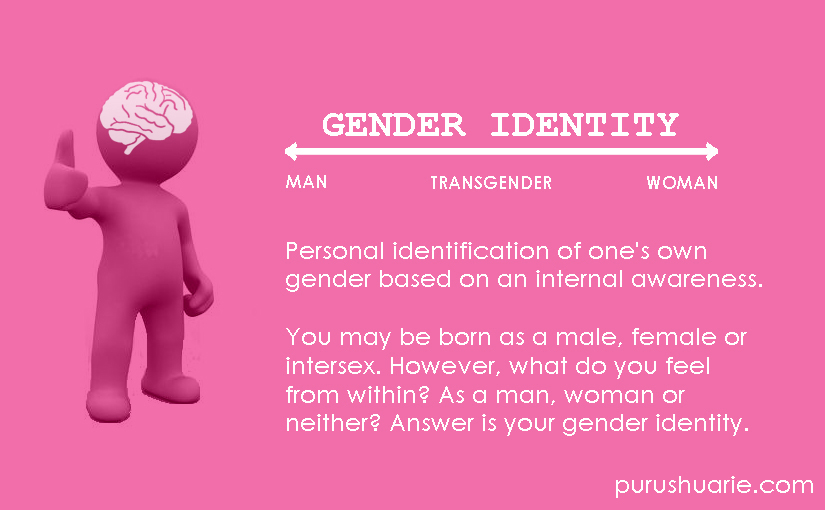 Gender expression stems from preconceived notions of our society. Our society has predefined what’s masculine and feminine. It’s about how an individual wearing a certain clothing, a certain profession (like say ballet dance), or displaying certain traits like being expressive is often tagged as feminine. Whereas, playing sports, displaying aggression and plenty of other behaviours and actions are tagged as masculine.  It’s about how you express yourself in relation to traditional gender roles dictated by society.

Androgynous combines both masculine and feminine aspects. Gender Neutrality is about rejection or absence of gender specific notions. 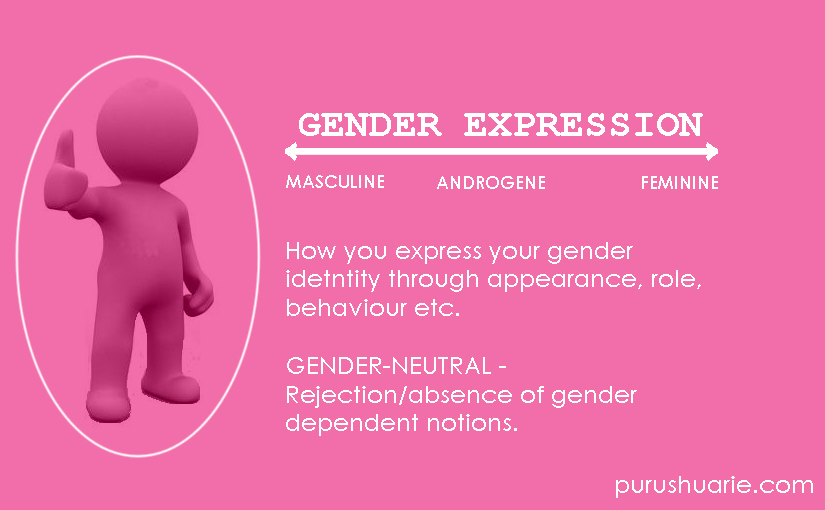 SEXUAL ORIENTATION – WHO YOU’RE ATTRACTED TO